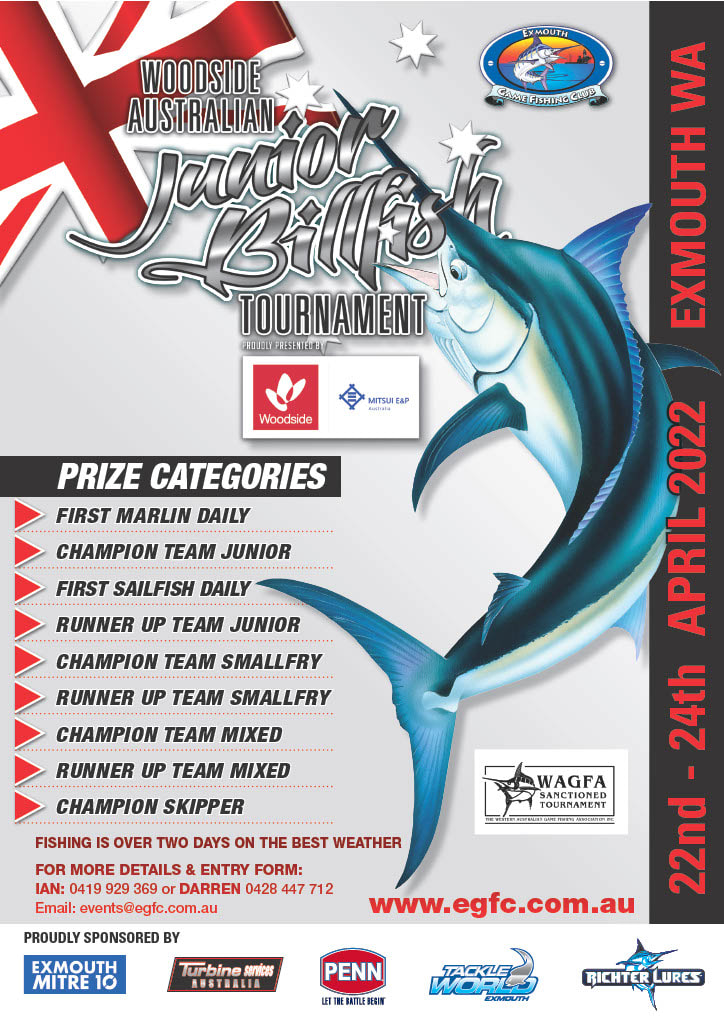 Woodside Australian Junior Billfish Tournament 2020 Results
The Exmouth Game Fishing Club’s 2020 Woodside Australian Junior Billfish Tournament was scheduled to be held over the school holidays weekend of October 2-4. Unfortunately a forecast for extreme winds and high seas forced the event to be postponed to the following weekend of October 9-11 which caused a number of teams to have to pull out. However, the event still managed to attract 5 teams fishing 11 junior or small fry anglers.
The fishing was poor by Exmouth standards across the tournament’s two days, with no marlin tagged and only a handful of sailfish populating the tag cards. Team Pelagic Hooker with small fry anglers Jessie Lawler, and brothers Nate & Cruz McEwan managed to find a few early season sailfish on baitballs inside Exmouth Gulf, and their 4 fish over two days (with 1 fish having to be disqualified due to a crew member handling the rod during the fight) turned out to be the only fish tagged.
As a result, Pelagic Hooker won the Overall and Small Fry sections, with all other tournament sections remaining vacant. Despite the slow fishing, all teams reported their junior and small fry anglers had a great time and perservered right until the end. Well deserved participation prizes were handed out to all competitors on the presentation night.
Australian Junior Billfish Tournament 2018 Results
Over two days fishing in magic weather, 9 teams and 24 Junior or Small Fry anglers competed in the Exmouth Game Fishing Club’s 2018 Australian Junior Billfish Tournament. The September timeslot of this tournament makes it largely a light tackle tournament targeting sailfish and small to mid-sized black marlin through Exmouth’s easy access inshore grounds, just a couple of kilometres from shore.
Although the weather was perfect, day one was extremely quiet by Exmouth standards, with just 6 fish raised for the day. Jack White on Teraliza tagged the only fish for the day; a small black marlin.
Day two, however, brought an improvement to the fishing, with most boats having shots at black marlin and sailfish. Some fantastic line class catches were also achieved by the young anglers over the course of the day, highlighted by the estimated 60kg black marlin on 10kg caught by even year old Lochlan Turrell fishing aboard Seatrix. Lochlan and his family travelled up from Perth to fish the tournament, and had a trip to remember with Lochlan also weighing a 35.4kg sailfish on 10kg in the lead up to the event, which is a pending Small Fry 10kg record.
Twelve year old Jaxon Kabelka and nine year old Declan Kabelka both fishing on Cin Bin also managed very respectable catches, each scoring matching 80kg black marlin on 15kg gear to put their team right amongst the leading boats.
By the end of what was a very enjoyable tournament for all anglers their crews, the fleet had raised 23 fish, hooked 18 and managed to tag 7 black marlin and 3 sailfish. Champion Team Junior went to Kajiki with anglers Oliver Smith & Zac Niikkula, while Teraliza with anglers Max & Mia Grasso, Jack White, Kalvin & Dean Gates took out Champion Team Small Fry. Champion Team Mixed was Seatrix with anglers Eloise Pugh, Lennox Farmer and Lachlan & Jasmine Turrell and their skipper Scott Turrell was awarded Champion Skipper. However, as a tournament designed to encourage and foster young angler participation in game and sport fishing, not a single angler walked away without a prize.
Special mention goes to Oliver Smith, Harvey Mitchell and Jorja Mossman who tagged and released their first sailfish during the tournament, and Jack White and Declan Kabelka who did likewise with their first black marlin.
Well done to all the winning teams, but more importantly, congratulations to all the kids who competed. We hope to see you all back again in 2019! 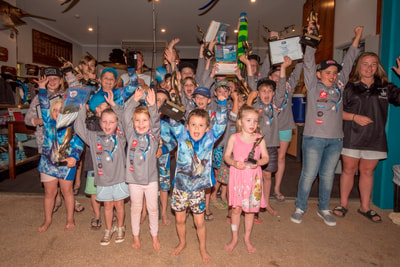 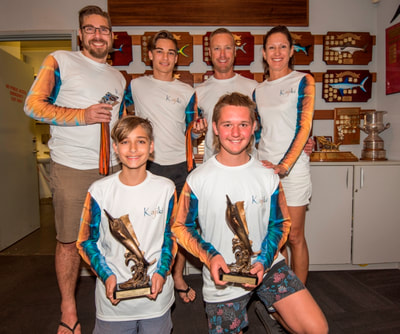 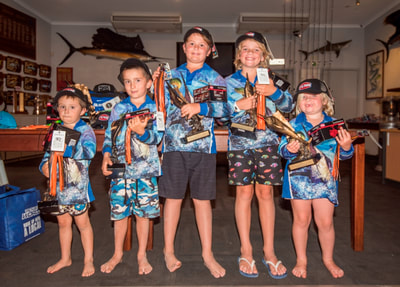 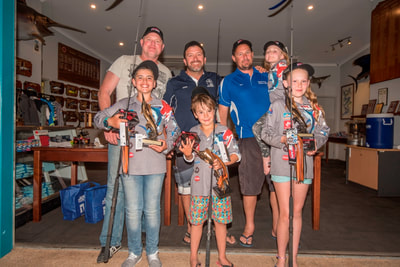 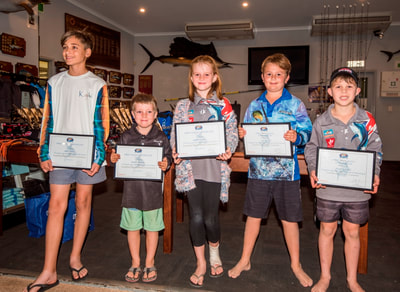 Results 2017
There were 27 junior anlgers and 11 boats that fished the Australian Junior Billfish Tournament on Saturday and Sunday.  Some teams came from Perth and Melbourne to get out and enjoy the opportunity to catch a marlin or sailfish during the 2day event.  Kids as young as 3 were entered and enjoyed learning about how to work as a team onboard to target billfish. Prizes were awarded for the first sailfish and marlin tagged daily and went to the following:
1st Sailfish Day 1- Jake Fitzgerald       1st Marlin Day 1- Zac Owens
1st Sailfish Day 2- Will Roche             1st Marlin Day 2- Jaxon Kabelka
There are 3 divisions of the teams that include juniors who are 11 or over, small-fry (under 11) and mixed. The winners were:
Champion Team Small Fry- Nail It with Zac Owens and Jake Owens
Champion Team Mixed- In Deep with Jake Fitzgerald, Jet Worsteling and Kalvin Gates
Champion Team Junior- Azura with Jesse Sutton and Will Roche
It was a tight finish with the runner up team for the mixed section (Sin Bin with Jaxon Kabelka and Lachlan Morton) tagging their fish to equal the points just eight minutes after team In Deep.
A massive thanks goes to all the sponsors, Home Hardware, Woodside, Turbine Services, Penn, Tackle World Exmouth, Bonze Lures and Eyre Rods.  Also thanks to the organisers and crews who help make this event happen for the kids.  Some crews don’t even have their own kids, but offered their boats to take kids out with their parents to learn about the methods, fun, team effort and tagging program that we have for billfishing. Every child that entered received a tournament shirt and if they didn’t win a trophy, they walked away with prizes, knowledge, knew skills, new friends and great memories.  A big congratulations to all the kids that competed and got out for the two days to target these species. Book ahead for next year’s event that will be September 21-24, 2018 (long weekend for WA). 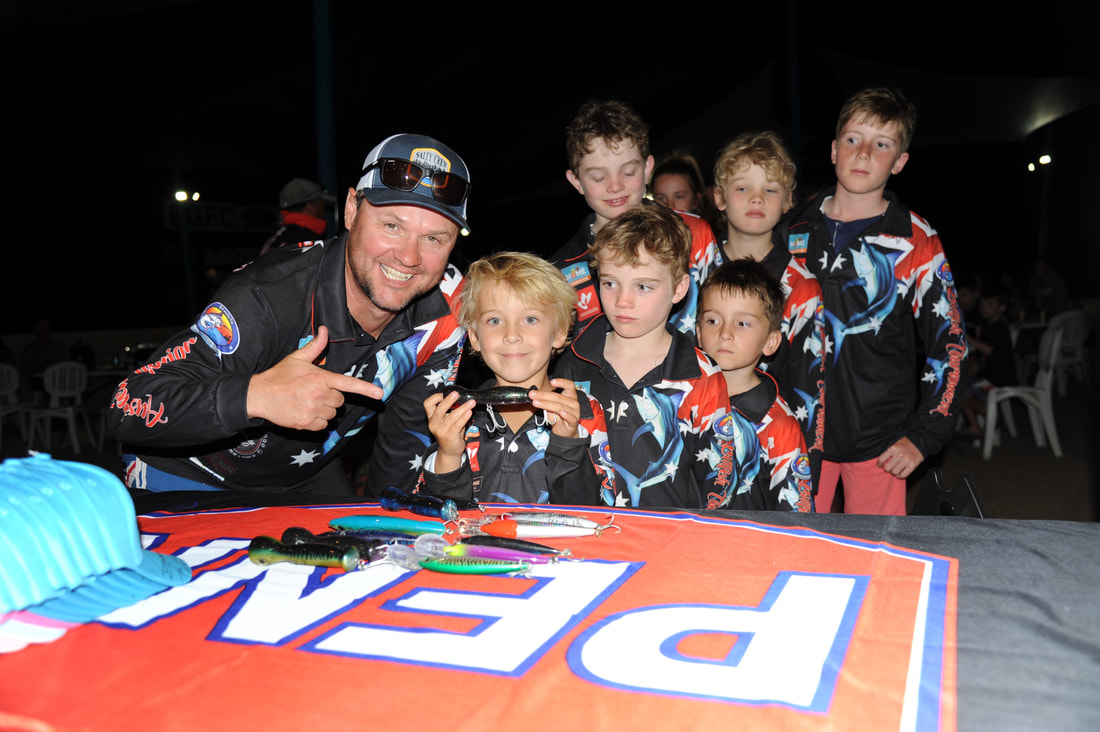 The 2016 Australian Junior Billfish Tournament was held on Friday and Saturday, as 9 teams with 22 anglers headed out to target sailfish and marlin.  The crews started early with Will Cunningham aboard On Strike tagging the first marlin at 845am on the first day.  There were 6 marlin tagged on day one and many cheeky grins from excited youngsters as they talked among mates at the clubhouse that night.  Day two had a calm start and Trent Gregory tagged the first sailfish at 810am, followed by Trent also tagging the first marlin at 945am aboard Ningaloo.  There were 8 billfish tagged on day 2.  The tagged fish comprised of 10 black marlin and 4 sailfish, with some fish estimated over 100kg.  Coen Bryce, Jake Fitzgerald and Tait Missen all tagged their first ever billfish.  The winning teams were
Champion Team Junior. Team Azura with William Roche and Jessi Sutton
Runner-up was team Grand Slam with Hayden Michaels and Liam Collins
Champion Team Mixed. Team Kajiki with Riley Smith, Tait Missen and Summer Missen
Runner-up was team Ningaloo with Trent Gregory and Jake Fitzgerald
Champion Team Small Fry. Team Reckless with Zac Owens, Lincoln Bryce and Coen Bryce
Captain Eddy Lawler won Champion Skipper, while Captain Ben Knight was runner-up.
Interestingly, there were two kids with broken arms that fished and one with a broken collar bone!  Despite the recent injuries, the keen anglers got out on the water in some testing seas and tagged some great fish.  There were fantastic prizes for each section including days out on charter boats, Penn rods and reels, lures, caps, travel bags, signed books from Dr Julian Pepperell and Paul Worsteling, and of course some great trophies to take home. Every child received a shirt valued at $60 and entry was only $25, thanks to the sponsors of Home Hardware Exmouth, Woodside, Turbine Services Australia, Penn reels, Clipsal, Peak Sportfishing Adventures, On Strike Charters and Ningaloo Sportfishing Charters.  This event is well suited for juniors, with fishing grounds just minutes from launching facilities, plus a choice of sailfish, black, blue or striped marlin. There were boats available for juniors to fish aboard, so if you missed out this year, make sure you ask about the 2017 event, which is tentatively scheduled for the middle weekend (first weekend is Exmouth 50th celebrations) of the school holidays in September. 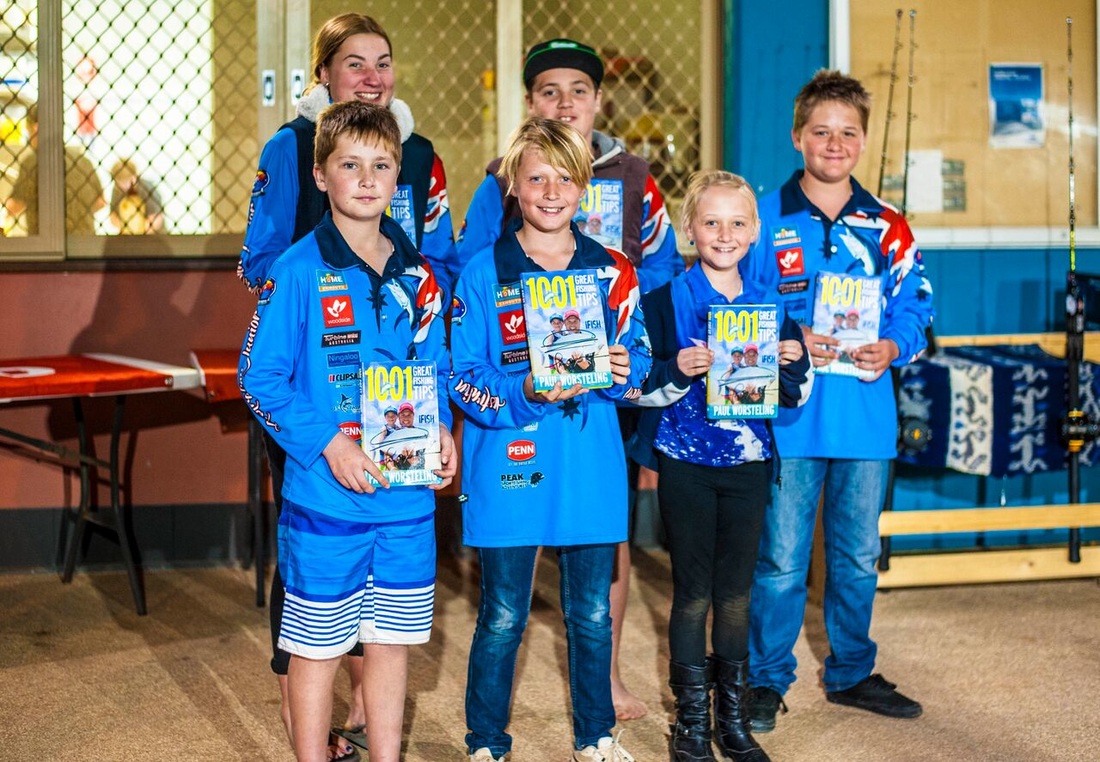 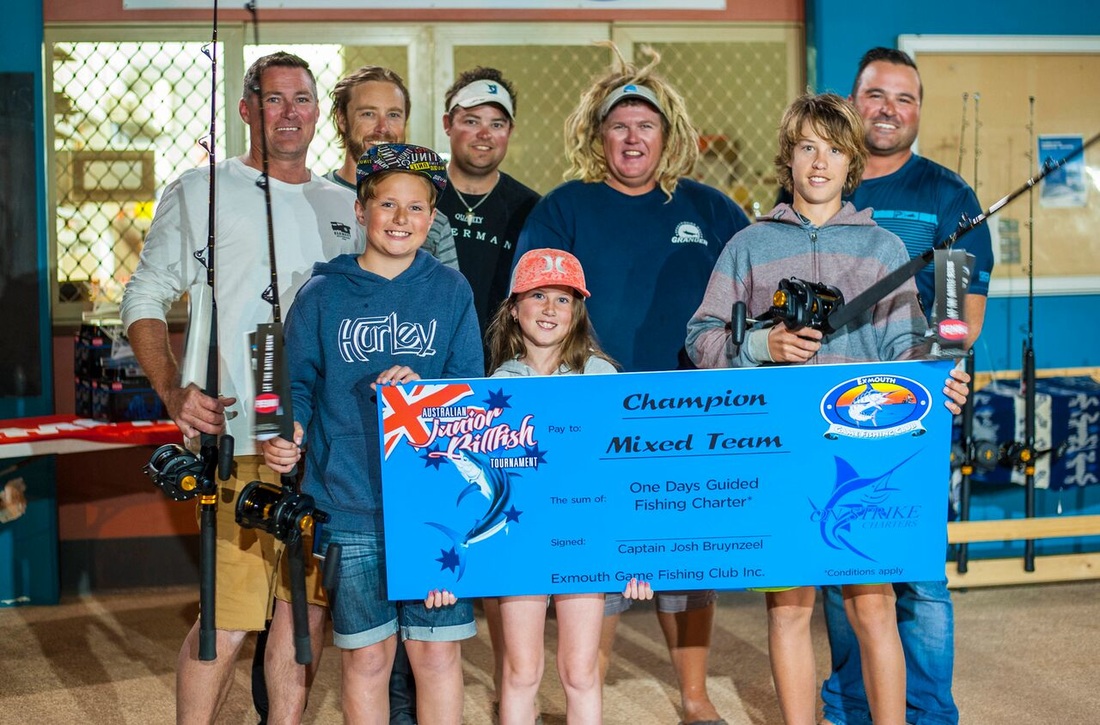 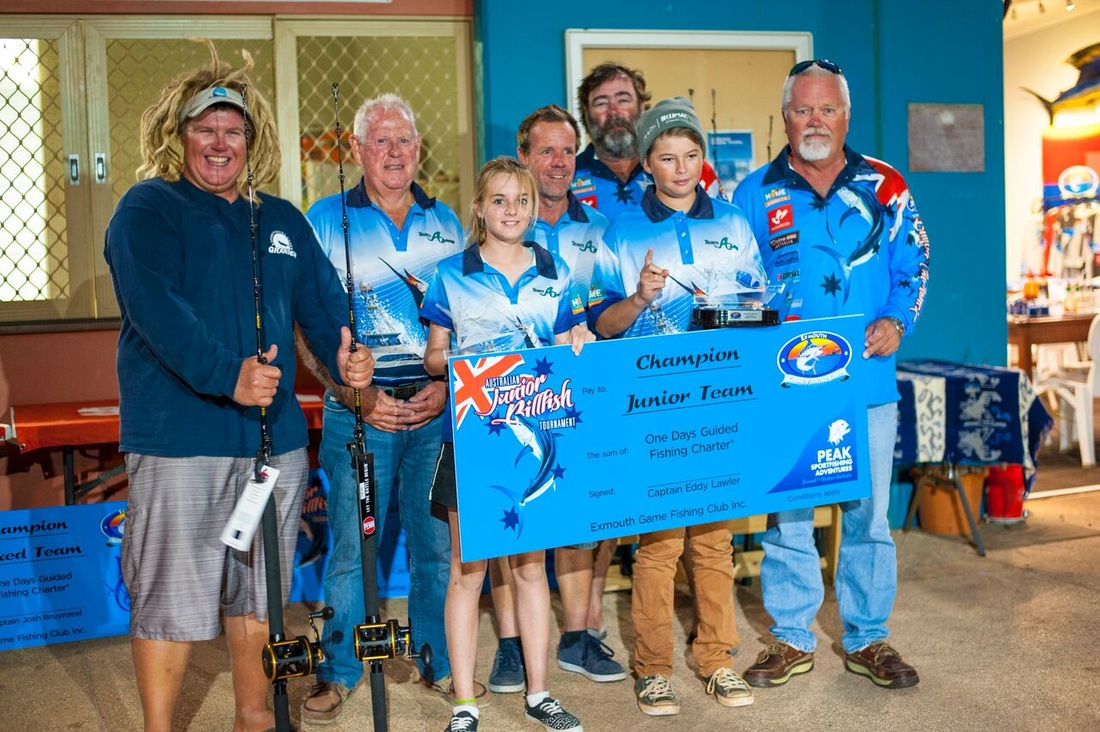 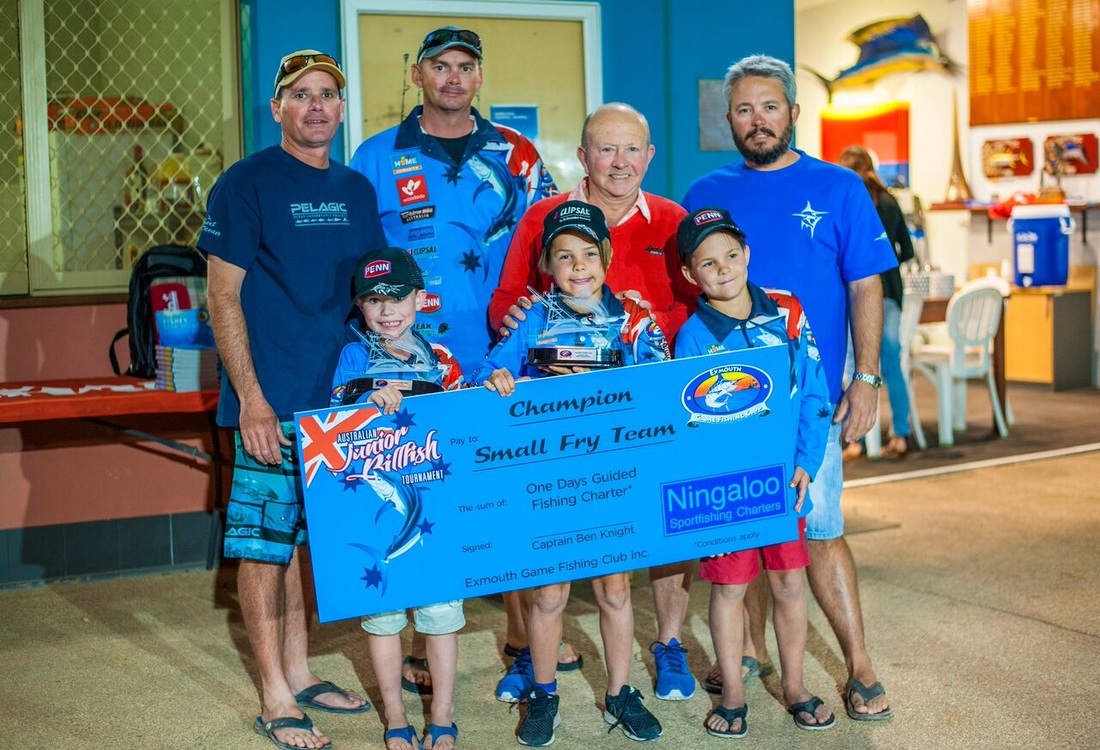 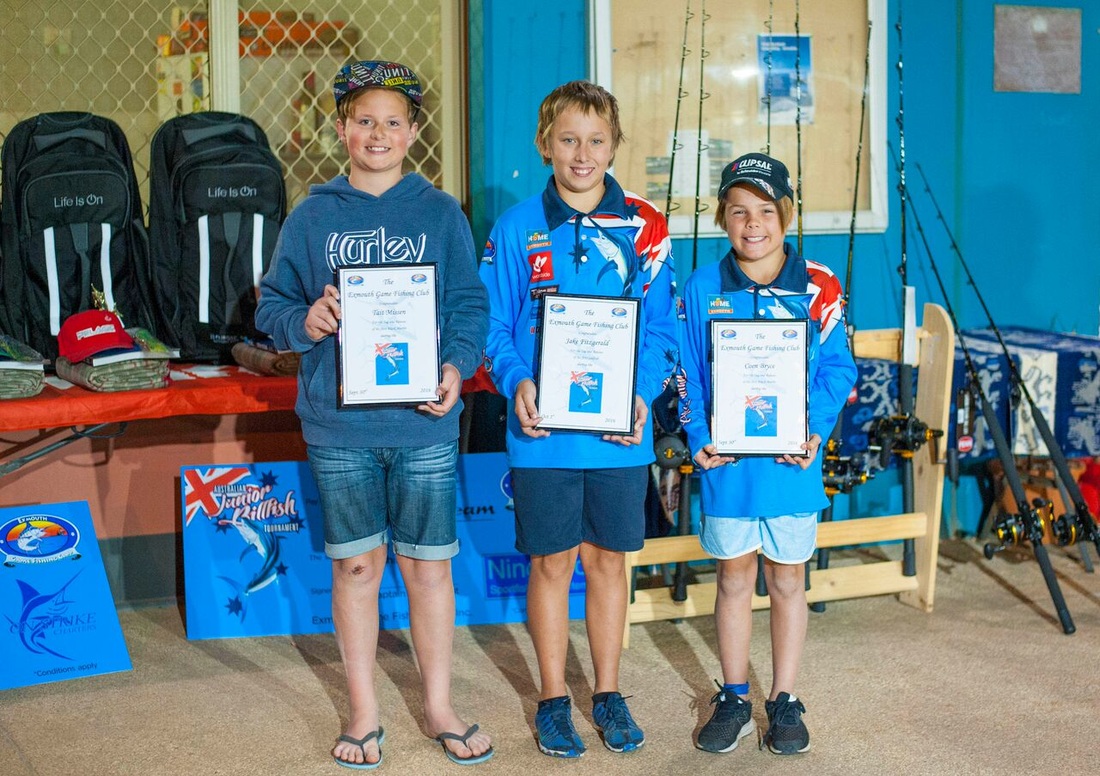 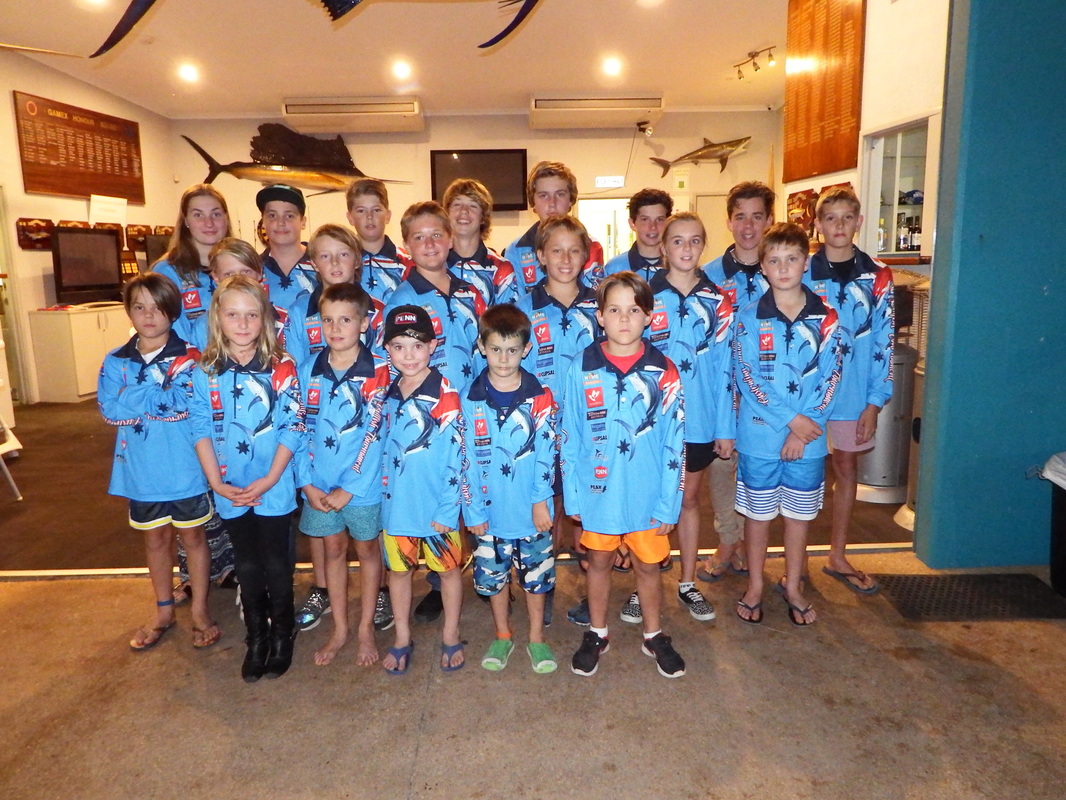