Please note that some rules may have changed from GAMEX 2022.
Tournament rules may be subject to change at any time up until the tournament Briefing (Saturday, March 18).
See rules below or click the button to download.
DOWNLOAD GAMEX 2022 RULES
TOURNAMENT RULES
​1. Regulations: All EGFC tournaments will be fished within current Game Fishing Association of Australia (GFAA), Western Australia Game Fishing Association (WAGFA), WA Department of Transport, WA Department of Environment and Conservation, and WA Department of Fisheries rules and regulations.

3. Entry & Registration: Entries close 10pm, Friday March 17, 2023.
All teams entered must register with at least one team member attending the GAMEX Briefing Night on Saturday March 18, 2023.
Only registered competitors may participate in any act which directly contributes to the capture or tag of a fish during the tournament. They are, driving the boat, gaffing fish, tagging fish, running out lines, retrieving lines, clearing teasers or taking the leader.
Competitors will fish only from the boat on which they registered. Permission to change boats once registered in the tournament must be applied for in writing to the EGFC Committee and each request will be adjudged on its merits. The Committee will meet ASAP after receipt of such application. The Committee's decision is final.

4. Fishing Area: All Tournament competitors must fish within 60 nautical miles of the EGFC Clubhouse, from a boat at sea, with a minimum of two competitors on board. All other safety requirements apply.

5. Lines: All fish must be claimed on the line class on which they were captured.  Backing can be used of an undetermined breaking strain in braid, dacron or monofilament, however, a MINIMUM TOPSHOT OF 16 METRES OF IGFA RATED LINE MUST BE USED (for record claim purposes, 16m continuous, single line is required).
Random gear checks will be conducted throughout the tournament.

8. Tag Cards: Billfish are to be tagged with NSW DPI tags. These tags have an orange tag card. Sharks must be tagged with NSW DPI tags. These tags have a yellow or blue tag card. No other tags will be accepted.
Tags are available from the tournament registration desk at the GAMEX Prep Clinic & Social Night (Friday March 17) on the Briefing Night (Saturday March 18), or from the tournament Weigh Station during weigh-in times throughout the rest of the tournament.
Tag cards, FULLY COMPLETED, must be presented to the Weigh Station ON THE DAY OF CAPTURE during the tournament weigh-in times. Failure to lodge fully completed tag cards will result in all points being forfeit.
One member of the team, or a representative, must sign the capture receipt at the Weigh Station when lodging a tag card(s).
All unused tags must be returned to the Weigh Master by tournament close.

9. Tag & Release Sections: Tag & release section winners will be decided by:
a) Boat/angler with the highest total of tag & release points;
b) In the event of a tie on points, the boat/angler with the lowest average line class;
c) If still tied, the boat/angler achieving the points first according to the time the tag was logged on the Track My Fish app.
Points will be awarded as follows:

Points accrued for tag & release sections are per tag, not per line class.
Sharks tagged must be a minimum of 100cms in length to accrue tag & release points, as per GFAA regulations.

10. Weigh-In: Fish may only be weighed at the official Weigh Station at the EGFC clubhouse during the times stated in the event program. Weigh Station staff will input details of weighed fish onto the Track My Fish app for tournament points to apply.
Fish must be presented at the Weigh Station on the day of capture unless otherwise arranged with the tournament Weigh Master under extraordinary circumstances only. Fish must be in an edible condition or will be disqualified by the Weigh Master. Mutilated or frozen fish will be disqualified.
Anglers must present the fish, together with the rod and reel, at least 16m of line, and any double, leader, lure or hook arrangement used in the capture. All tackle must be removed from the fish by the angler before weighing. The angler or a witness must sign the capture receipt at the recorder’s station.
Fish will not be accepted for the tournament after the close of weigh-in on the final day.
No points will be awarded for sharks weighed in during GAMEX.
Billfish may be weighed in for record purposes only during GAMEX. Any billfish weighed in as a potential record will be awarded billfish tag & release points, provided the fish exceeds a minimum length for the record section being claimed. See the tables below for minimum acceptable lengths for billfish weighed in.

13. Top Tagging Captain: The George King Memorial perpetual trophy will be awarded to the captain who has attained the most number of billfish (sailfish, spearfish, marlin and swordfish) tagged according to the tag cards submitted.
Note: A captain is not deemed to be an angler and a captain at the same time. Fish tagged by the designated captain do not count towards this trophy.

14. Qualifying for the Northbank Trailerboat Draw: All teams fishing GAMEX 2023 are eligible for entry into the $50,000 Northbank trailerboat package draw. To qualify for the draw, a registered team must:

15. Hooks for Billfish: When fishing natural baits (either dead or live) for billfish, anglers cannot use J hooks or offset circle hooks. In-line circle hooks only are to be used.
J hooks are still permitted when fishing lures for billfish.

17. Radio Communications:  All boats must be fitted with an operational VHF radio system and are required to log on and off with Radio Base on each day of the tournament. Tournament radio coverage will be exclusively VHF channel 21.
The tournament Radio Base call sign will be announced at the GAMEX Tournament Briefing.
A non-functional radio must be repaired before the affected vessel goes to sea the following day. Vessels failing to comply will be disqualified for that day.
Each boat will be asked to give their sked of billfish raised, hooked and tagged, and how many fish lost to sharks over the radio at log off each day.
FAILURE TO LOG ON AND OFF WITH TOURNAMENT RADIO BASE EACH DAY MAY RESULT IN POINTS BEING FORFEIT.

18. Lines In and Out: Lines in and out times will be as printed in the tournament brochure and notified at the Tournament Briefing.
Lines for collecting bait may be fished before lines in each day, however , no line is to be in the water from 15mins prior to lines in, including bait jigs and teasers.
A radio call will be made at 15mins prior to lines out. At this time any vessel that is hooked up, or hooks up before lines out, must notify Radio Base and be acknowledged. A boat may continue to fight a fish after lines out if they have notified Radio Base. Weigh-in time restrictions still apply. All other boats are to observe radio silence during the last 15 minutes of lines in.

19. Protests: A verbal intention to protest must be made to the Weigh Master as soon as possible by the protestor. This is to enable the Weigh Master to preserve any evidence that may be needed by the Committee if the fish/tag card is presented before the protestor can attend the Weigh Station. All protests must be lodged with the Weigh Master in writing with a $100 deposit which will be refunded if the protest is upheld. Protests must be lodged before the close of weigh-in on the day the fish was weighed or tag card presented. No further protests will be accepted after completion of the weigh-in on the final day. The Committee will consider all protests as soon as possible after receipt. The Committee's decision is final and the affected parties will be notified ASAP.

21. Boat Auction: There will be two Boat Auction categories:
A. Champion Boat Overall
B. Champion Boat Tag & Release Billfish.
The winner of category A will be the person who purchases the boat during the boat auction on the tournament Briefing Night that places first in the Champion Boat Overall section. The winner of category B will be the person that purchases the boat that achieves the highest Tag & Release billfish points score based on the following formula:
In the event of a tie on points, the boat with the lowest average line class will be declared the winner. If still tied, the boat achieving the tags first, according to the time of tagging logged on the Track My Fish app, will be declared the winner.
The winner of each Boat Auction division will receive 50% of the relevant Boat Auction division pool. The runner-up will receive 30%. The EGFC will retain 20%.
In the event of a tie, each prize pool percentage will be divided evenly (example: if there is a tie for first place each winner will receive 40% and the EGFC will retain 20%.  If there is an outright winner and a tie for runner-up the winner will receive 50%, each runner-up 15% and the EGFC will retain 20%).
Boat auction monies will not be refunded after the hammer fall. All boats are bought on an as-is basis.
Boat Auction buyers will be asked to sign for the amount reached at auction immediately after the hammer fall and must pay the money owing immediately via cash or EFTPOS.

22. Conduct: All competitors will participate in a sporting manner and embrace the ethics of game fishing. All fish offal must be disposed of correctly. The Committee reserves the right to penalise any Boat or Angler by deduction of points or disqualification for part of, or the whole tournament for conduct they consider detrimental to the tournament or the EGFC.

23. Cyclones: In the event that a cyclone approaches the Exmouth area during the
GAMEX tournament, all fishing will be suspended once a ‘Yellow Alert’ has been declared or winds forecast exceed 26 knots. Fishing will recommence once the ‘All Clear’ has been given, provided sea conditions are deemed acceptable by the committee, as per the tournament weather matrix.
If no further fishing is possible, the leading boats/anglers at the time of the Yellow Alert will be declared the winners at the committee’s discretion. The EGFC recommends all competitors have appropriate insurance for the event, including travel, accident and boat. This is the responsibility of the skipper and team, not the EGFC or its event organisers.

26. Disclaimer: The EGFC Committee reserves the right to change any rule, regulation or section which it believes will enhance the Tournament. The EGFC takes no responsibility for loss or damage to competitor’s person, personal effects or vessel and competitors fish the tournament at their own risk.

27. Minimum Billfish Weigh-in Lengths: Any billfish weighed in as a potential record during GAMEX will be awarded billfish tag & release points, provided the fish exceeds a minimum length for the record section being claimed. The charts on the following pages show minimum acceptable weigh-in lengths for all billfish species. All figures are short length (tip of the lower jaw to the fork of the tail) in centimetres.
*Denotes Western Australian record sections which are vacant at time of publication. In these cases, the fish weight must only exceed that of the line class in use to be eligible for record claim and tournament points. 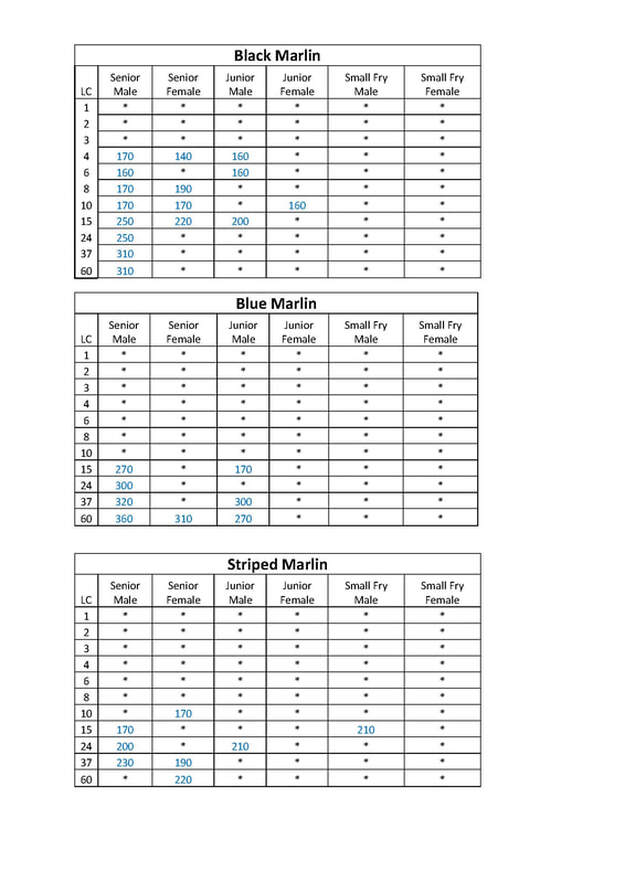 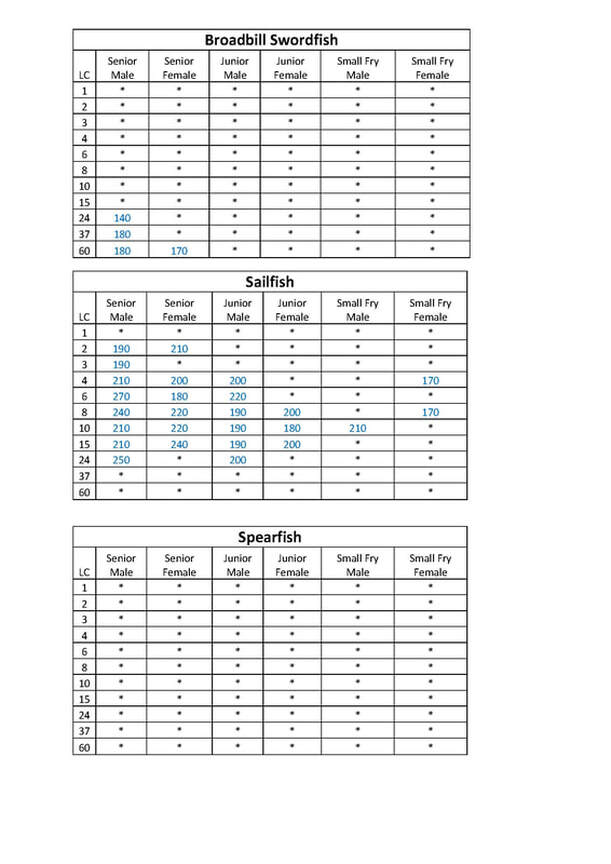