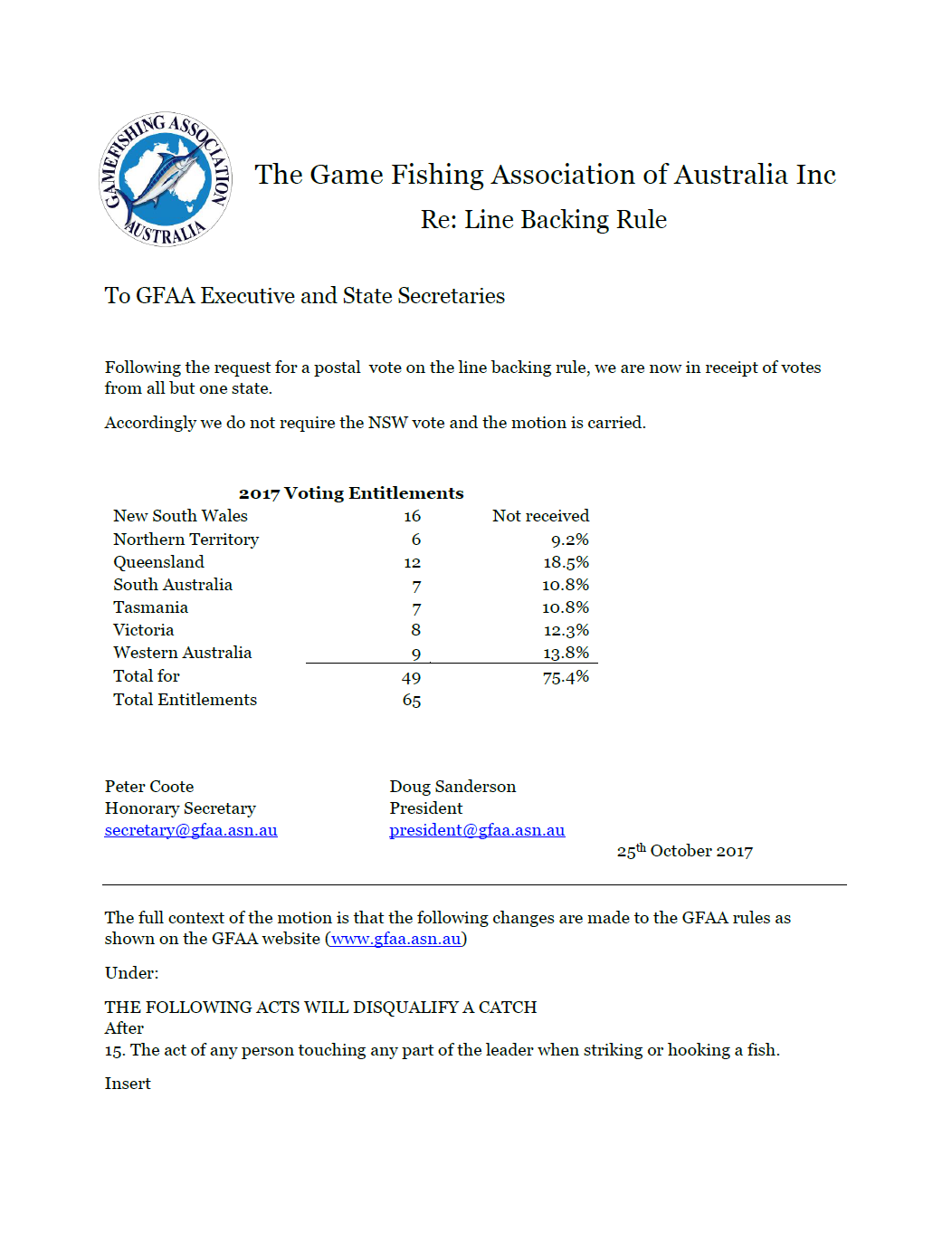 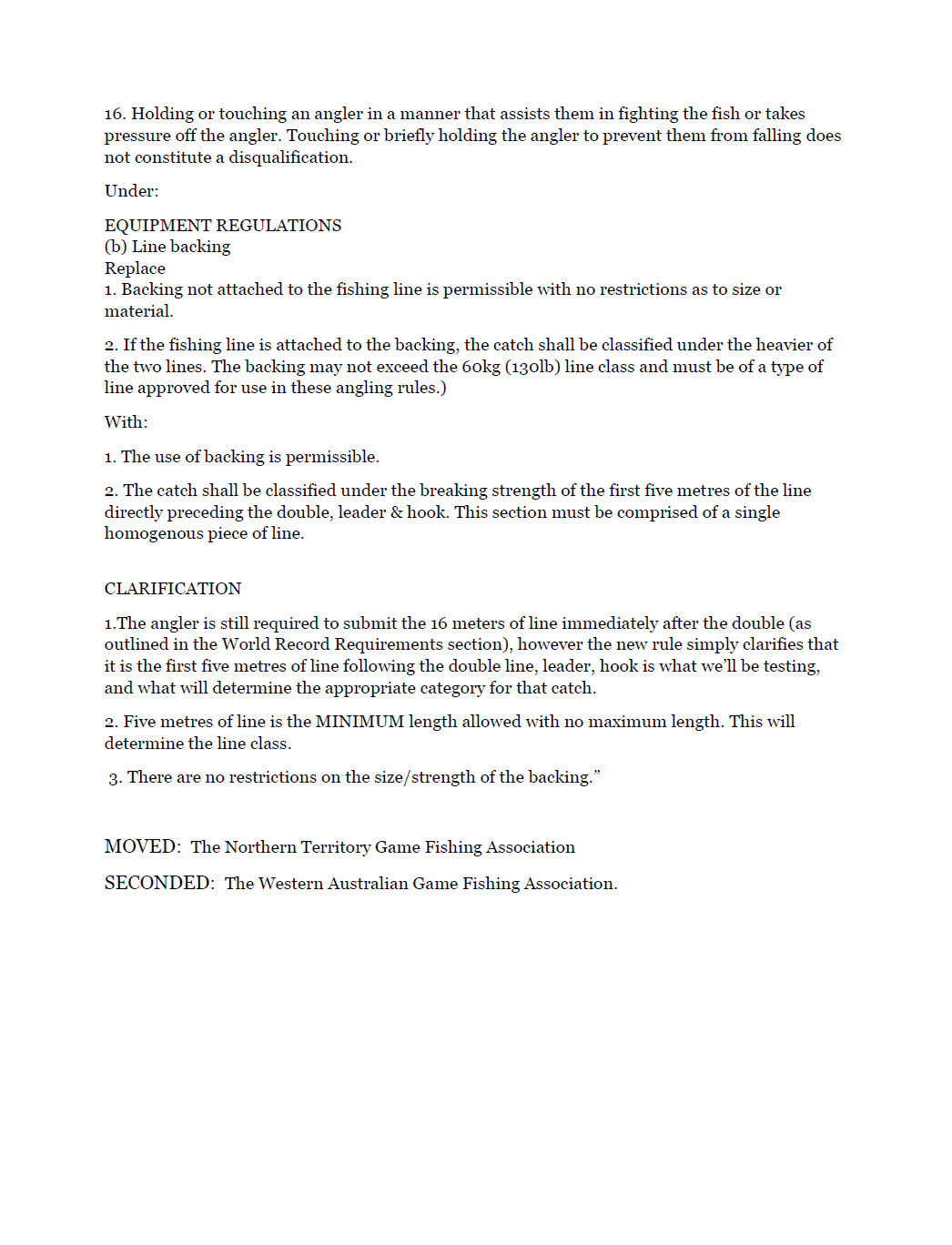 Pg 57
THE FOLLOWING ACTS WILL DISQUALIFY A CATCH:
#2 Add in to follow on from the existing rule.
Holding or touching an angler in a manner that assists them in fighting the fish or takes pressure off the angler. Touching or briefly holding the angler to prevent them from falling does not constitute a disqualification.

Pg 54
EQUIPMENT REGULATIONS:
(b) Line backing change to Line & Backing.
New 1. The use of backing is permissible.
New 2. The catch shall be classified under the breaking strength of the first five metres of the line directly preceding the double, leader & hook. This section must be comprised of a single homogenous piece of line.

These rule changes have now been added to the rules displayed on the GFAA website (www.gfaa.asn.au).

How did These Changes Come About?
The evolution of these changes emanated from a series of workshops, with input from all states, discussing proposed changes to be submitted at an IGFA Rule Conference held in Orlando, Florida in July 2016. Those rule changes that were acceptable to IGFA were put to the Annual General Meeting of GFAA in September 2016 where there was unanimous acceptance of the wording to be referred to IGFA. IGFA President Rob Kramer, who was present at the meeting, undertook to expedite the changes through IGFA. In the past week, these GFAA proposed changes have been approved and adopted by IGFA.
The meeting in Orlando was attended by GFAA President, Doug Sanderson and GFAA Life Member and IGFA Trustee, Neil Patrick, where they received an excellent hearing with a well organised presentation and were viewed as leaders of change. Contributors to finalising the changes, along with Doug and Neil, were Peter Babarskas - Chairman of the Rules Committee, Peter Cox – Vice President, Treasurer and Rules Committee Member and Peter Coote - GFAA Secretary.

When Will these Rule Changes Apply?
These GFAA rule changes are effective immediately, and as such, the EGFC has also endorsed these new changes effective immediately, meaning they will apply for the upcoming Australian International Billfish Tournament (AIBT) and GAMEX.
However, the same changes will not apply to IGFA rules until the 1st of April, 2017, so until this time any potential world record claims will need to be submitted under the previous set of IGFA rules.

Clarification on Line & Backing Changes
The changes to use of backing line is the most significant of these rules updates, and reflect a progressive approach by GFAA and IGFA in regulating to modern fishing tackle technology and fishing techniques.
To provide further clarification on the new Line & Backing rules, GFAA representatives have provided the following, unofficial points which should answer any further questions regarding these changes to the standing rules -
Please note the recent document from IGFA for record claims below. 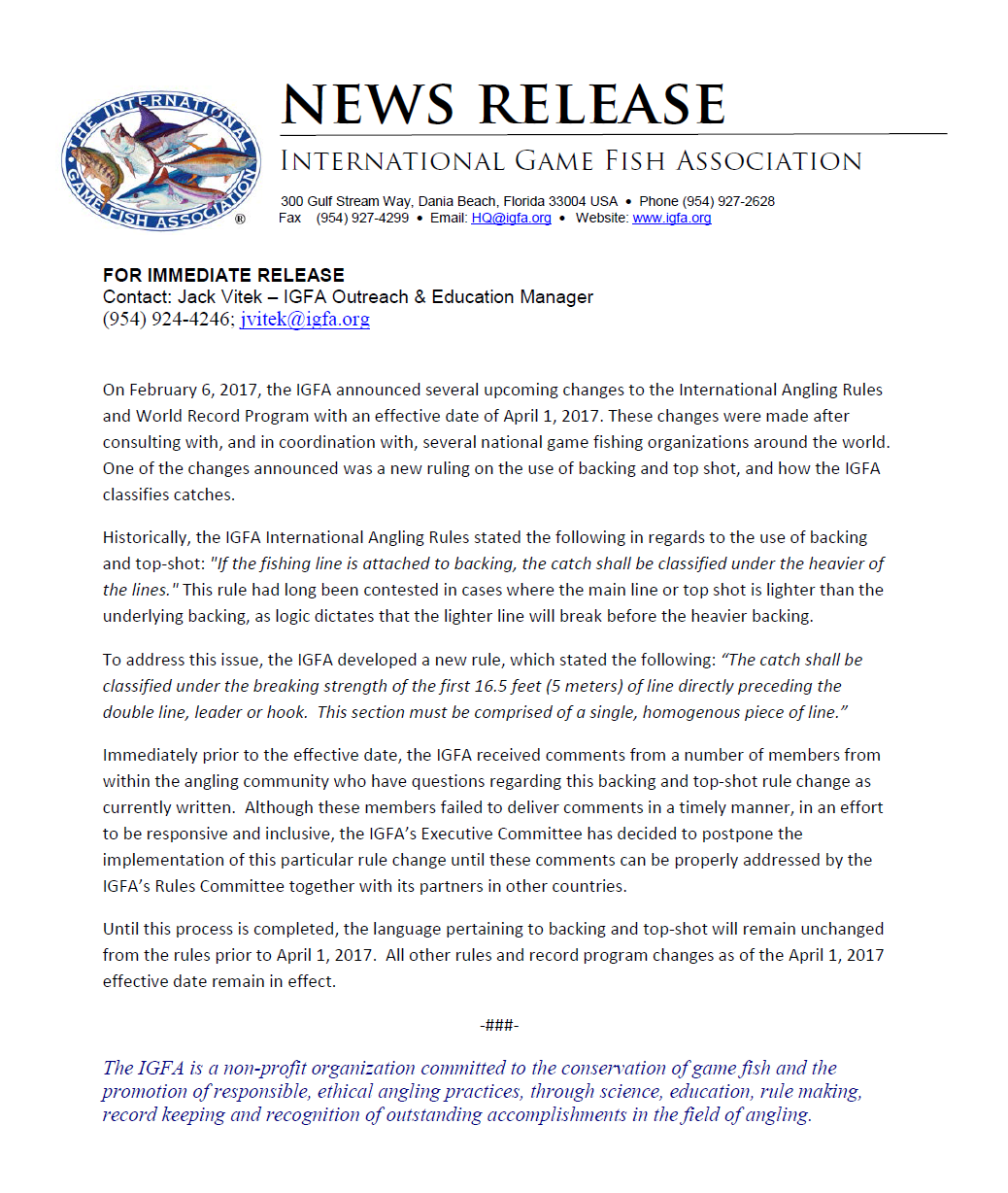